In part one of this series, I covered what might seem like a paradoxical outcome of hyperventilation—that breathing more than necessary actually reduces the amount of oxygen to the brain. In this installment, I’ll explore two more effects of my experience of over-breathing: involuntary muscle spasms while hyperventilating and long periods of apnea (not breathing) afterwards.

The muscle contractions I experienced while hyperventilating were dramatic. My limbs took on a life of their own, flopping like fish as my hands and feet spasmed (a condition known as tetany), all without conscious volition. There are several hypotheses about why this happens, but the most widely accepted has to do with calcium levels in the bloodstream. As I mentioned earlier, when CO2 levels in the blood drop, pH rises. This alkaline shift causes changes in a blood-borne protein called albumin. Albumin then binds to calcium, reducing the amount of free calcium in circulation. This in turn causes peripheral nerves to become more excitable. These hair trigger nerves then fire repeatedly, sending signals to muscles that cause them to contract involuntarily.

After I quit hyperventilating, I found myself pausing for long periods after my exhalations, in a way that also felt involuntary. To my partner, it looked as if I had stopped breathing altogether. These periods of not breathing have been observed in many people after hyperventilation, but they are not easy to explain. Let’s start by diving into what controls breathing. 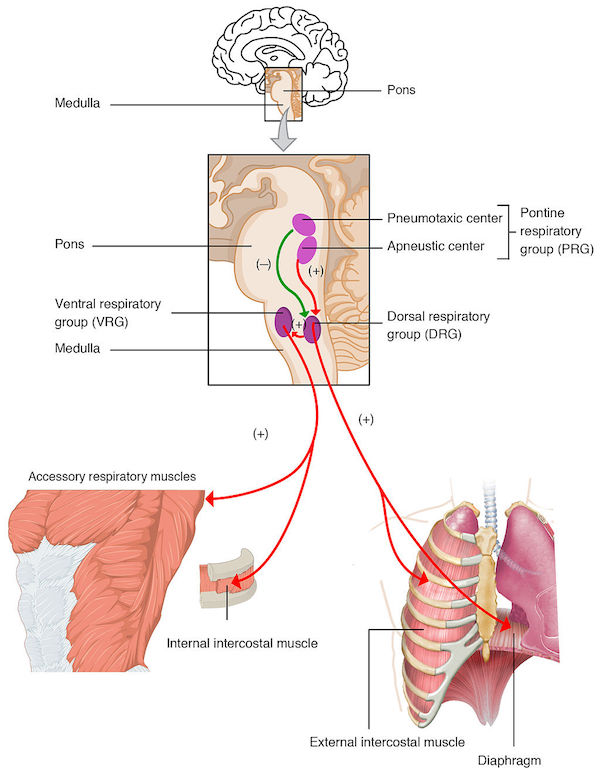 Your breathing rate is directly controlled by several regions within the brainstem, collectively called the respiratory center. The respiratory center, left to its own devices, generates a regular series of impulses along the phrenic nerve that cause the diaphragm (your main breathing muscle) to rhythmically contract and relax, in turn causing you to breathe in and out. However, the respiratory center doesn’t exist in isolation; it receives inputs from many other parts of the nervous system that alter that rhythm. Some inputs are excitatory, encouraging more frequent breathing; others inhibit breathing.

The primary inputs that stimulate breathing come from sensors known as chemoreceptors, which continuously sample the chemical composition of body fluids. Some chemoreceptors are sensitive to oxygen; when arterial oxygen levels decline, they trigger an inhale. Under normal circumstances, though, oxygen levels don’t drop low enough to stimulate these receptors. They are like a thermostat turned way down; they only click on when oxygen levels are very low, and thus serve more as a last resort than a day in, day out regulator of breathing.

Other chemoreceptors, located in both your brainstem and in your arteries, are sensitive to carbon dioxide levels. Those located in the brain stem are the primary regulators of breathing rate. Technically, they don’t sense carbon dioxide; rather they test the pH of the cerebrospinal fluid (the fluid bath the brain and spinal cord float in). However, since the prime determinant of cerebrospinal pH is the carbon dioxide level in the blood, it amounts to the same thing. These sensors are far more sensitive than oxygen sensors; even a small rise in CO2 levels will cause them to fire, sending a signal to the respiratory center to trigger an inhale. Thus, we could say that, by and large, we don’t breathe to take in oxygen, but to get rid of CO2.

There are many other inputs into the respiratory center as well, in particular from the cerebral cortex (the “executive office” of the brain, where conscious decisions are made) and the limbic system (a group of areas of the brain concerned with emotion). It’s not only physiology that determines breathing; emotions and conscious decisions play a role too.

For instance, you could choose not to breathe. Of course, you would soon find that your ability to control your breath in this way is limited. As CO2 levels rise, stimulation from the chemoreceptors will overpower signals from the “higher brain” and you’ll have no choice but to breathe. You can’t kill yourself by holding your breath. (An exception may be divers who hyperventilate before going underwater. Lowering CO2 levels beforehand allows them to hold their breath longer while diving. But if they don’t breathe when they need to, oxygen levels in the brain may drop so low that they lose consciousness and drown.)

This might seem to explain those long periods of breath suspension when I gave up on hyperventilation: CO2 levels in my bloodstream had dropped so low that it took a while for them to build up high enough trigger another inhale. However, there is a problem with this answer. Chemoreceptors respond to increases in CO2; they are indifferent to decreases. In other words, they won’t cause you to stop breathing. This is why people who hyperventilate can continue to do so for long periods of time; there’s nothing to stop them, short of losing consciousness.

There are a lot of discrepancies in the research around this issue. Some studies have found periods of apnea common after hyperventilation; others have found the opposite. Some of this variation is likely due to the length of the period of hyperventilation being studied, with apnea being more common after long sessions than short. However, even discounting that, there is a great deal of individual variation in how people respond to the aftermath of hyperventilation. Some react as I did, by ceasing breathing. Others don’t. And we still have the problem that there is no clearly explicable physiological reason why low CO2 levels should cause breathing to stop.

Of course, I was not a physiologically naive subject going in. I was aware that hyperventilation lowers CO2 levels, so perhaps at some level I made a conscious decision to stop breathing to bring them back to a normal range to restore blood flow to my fogged up brain. That’s a possibility, but to me, those periods of breath suspension felt involuntary, as if some unconscious part of the brain took over to restore my system to balance. I guess we have to leave it at that, until further research explains what happens.

In any case, not everyone will react to hyperventilation by quitting. Hyperventilation can continue, if the system of checks and balances that regulate internal conditions within the body don’t work well to restrain it. It may even be possible that hyperventilation could become habitual for some individuals. In the next installment, I will look at that possibility.